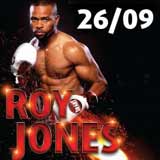 Review: 2014-09-26, pretty good finish but it is not enough to get three stars: Roy Jones Jr vs Hany Atiyo gets two. The 45 years old and former world champion in four different weight classes Roy Jones Jr entered this fight with a boxing record of 58-8-0 (41 knockouts) and he is ranked as the No.22 cruiserweight in the world, he has already fought once in 2014 beating Courtney Fry (=Roy Jones vs Fry).
His opponent, Hany Atiyo, has an official record of 14-2-0 (10 knockouts) but he is not ranked as he hasn’t fought since June 14, 2013 when he was defeated by Joey Vegas. Jones vs Atiyo is valid for the WBU cruiserweight title. Watch the video and rate this fight!