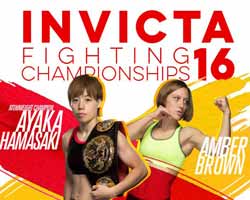 Review by AllTheBestFights.com: 2016-03-11, good work on the ground between Ayaka Hamasaki and Amber Brown: it gets three stars.

The black belt in judo Ayaka Hamasaki entered this fight with a professional mma record of 12-1-0 (50% finishing rate) and she is ranked as the No.1 women’s atomweight in the world. She suffered her only loss when she faced Claudia Gadelha in 2013, after this bout she has won three consecutive fights beating Herica Tiburcio in her last one (valid for the Invicta FC title, Tiburcio vs Hamasaki).
Hes opponent, Amber Brown, has an official record of 6-1-0 (67% finishing rate) and she entered as the No.7 in the same weight class. She has also lost in 2013, against Emi Fujino, but then she has collected four victories. Hamasaki vs Brown, main event of the Invicta FC 16, is valid for the Invicta FC atomweight title (Hamasaki’s first defense). Watch the video and rate this fight!

Report broken video
« Best of MMA: Ranking of the best mma Fights of the Year 2016 by ATBF
2016 MMA fight – Vanessa Porto vs Jennifer Maia 2 – full fight Video Invicta FC 16 »
HELP US!!! Since the CORONAVIRUS pandemic started, AllTheBestFights.com has struggled to survive! If you have enjoyed this website for the past 10 years, today we ask you for a little help: