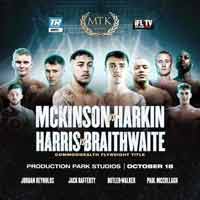 Review by AllTheBestFights.com: 2020-10-18, pretty good fight between Jay Harris and Marcel Braithwaite: it gets three stars.
Jay Harris entered this fight with a professional boxing record of 17-1-0 (9 knockouts) and he is ranked as the No.11 flyweight in the world but he comes off his first loss, suffered against Julio Cesar Martinez in February (Julio Cesar Martinez Aguilar vs Jay Harris); before this bout, in 2019, he had won over Brett Fidoe, Angel Moreno (Jay Harris vs Angel Moreno) and Paddy Barnes (Jay Harris vs Paddy Barnes).
His opponent, Marcel Braithwaite, has an official record of 9-2-0 (0 knockouts) and he entered as the No.148 in the same weight class. He fought three times last year beating Jake Pollard and Craig Derbyshire but then he lost to Sunny Edwards. Braithwaite vs Harris is valid for the Commonwealth (British Empire) flyweight title; undercard of Michael McKinson vs Martin Harkin. Watch the video and rate this fight!