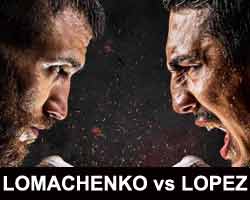 Review by AllTheBestFights.com: 2020-10-17, fight not so exciting as we expected but still worth watching for the high level of technique of both boxers: Vasyl Lomachenko vs Teofimo Lopez gets three stars. Moreover this match was ranked in the ‘Top 10 Boxing Fights of the Year 2020‘ (ranking generated by our users).
The 2012 and 2008 Olympic gold medalist and world champion in three different weight classes Vasyl Lomachenko entered this fight with a professional record of 14-1-0 (10 knockouts) and he is ranked as the No.1 lightweight in the world. Loma suffered his only loss when he faced Orlando Salido at his second professional bout in 2014 (controversial split decision, Salido vs Lomachenko), since then he has won 13 consecutive fights beating Anthony Crolla (Vasyl Lomachenko vs Anthony Crolla) and Luke Campbell in 2019 (Vasyl Lomachenko vs Luke Campbell).
His opponent, the undefeated former Olympian and current Ibf Lw champ Teofimo Lopez, has a perfect boxing record of 15-0-0 (12 KOs=80%) and he entered as the No.2 in the same weight class. In his last three bouts he has won over Edis Tatli (Teofimo Lopez vs Edis Tatli), Masayoshi Nakatani (Teofimo Lopez vs Masayoshi Nakatani) and Richard Commey (Richard Commey vs Teofimo Lopez). Many boxers and boxing trainers predicted who will be the winner of this fight in the past weeks, but just Oscar Valdez and Oscar De La Hoya think that the American will beat the Ukrainian while here are all those in favor of Lomachenko: Egidijus Kavaliauskas, Miguel Berchelt, Josh Taylor, Jose Zepeda, Jose Pedraza, Shawn Porter, Sergiy Derevyanchenko, Freddy Roach and Regis Prograis; but there are also some fighters who think it will be a 50-50 fight: Jamel Herring, Jose Ramirez, Tyson Fury, Leo Santa Cruz, Jaime Munguia, Chris Algieri and Terence Crawford. Lopez vs Lomachenko is valid for the WBA, IBF and WBO World lightweight belts (but also for the WBC Franchise Lw title: a franchise champion is “a special designation and status” that puts the winner of Loma vs Lopez above any of the champions in the lightweight category and it is to allow the big fight that the fans want to see). Watch the video and rate this fight!

If you are interesting in the Lopez vs Lomachenko compubox punch stats, look at the comments under this post