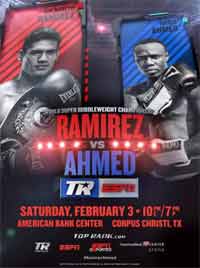 Review by AllTheBestFights.com: 2018-02-03, fight not so exciting between Jesse Hart and Thomas Awimbono: it gets two stars.

Jesse Hart entered this fight with a boxing record of 22-1-0 (18 KOs=82%) and he is ranked as the No.5 super middleweight in the world (currently the #1 in this division is Chris Eubank Jr). He fought twice last year beating Alan Campa and losing to Gilberto Ramirez Sanchez (=Ramirez vs Hart).
His opponent, Thomas Awimbono, has an official record of 25-7-1 (21 KOs=84%) but he comes off three consecutive losses: against Mike Gavronski, Derrick Webster and Caleb Plant. Hart vs Awimbono is on the undercard of Gilberto Ramirez vs Habib Ahmed. Watch the video and rate this fight!