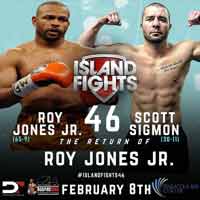 Review by AllTheBestFights.com: 2018-02-08, entertaining fight between Roy Jones Jr and Scott Sigmon: it gets three stars.

The 49-year-old former world champion in four different weight classes Roy Jones Jr entered this fight with a professional boxing record of 65-9-0 (47 knockouts) and he is ranked as the No.56 cruiserweight in the world. Jones ‘Junior’ lost to Enzo Maccarinelli in 2015 (Jones Jr vs Maccarinelli) but then he has won three fights beating Vyron Phillips, Rodney Moore (Jones Jr vs Moore) and Bobby Gunn (Roy Jones Jr vs Bobby Gunn).
His opponent, Scott Sigmon, has an official record of 30-11-1 (16 knockouts) and he fought three times last year beating David Markert and Javier Frazier but between these two bouts he lost to Luis Arias. Jones vs Sigmon is valid for the vacant World Boxing Union (German Version) cruiserweight title. Watch the video and rate this fight!