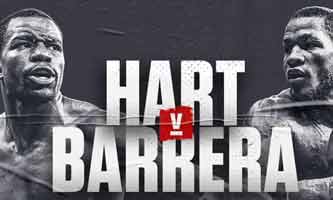 Review by AllTheBestFights.com: 2019-06-15, fight not so exciting between Jesse Hart and Sullivan Barrera: it gets two stars.

Jesse Hart entered this fight with a professional record of 25-2-0 (21 KOs=84%) and he is ranked as the No.6 super middleweight in the world but he comes off the loss against Gilberto Ramirez in their rematch (via majority decision, Gilberto Ramirez vs Jesse Hart 2); before this bout he had beat Mike Gavronski (Jesse Hart vs Mike Gavronski).
His opponent, Sullivan Barrera, has a boxing record of 22-2-0 (14 knockouts) and he entered as the No.10 light heavyweight. He fought twice last year losing to Dmitry Bivol (Dmitry Bivol vs Sullivan Barrera) and defeating Sean Monaghan (Sullivan Barrera vs Sean Monaghan). Hart vs Barrera is on the undercard of Tyson Fury vs Tom Schwarz. Watch the video and rate this fight!