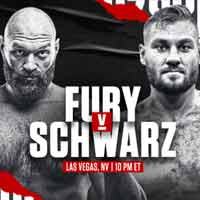 Review by AllTheBestFights.com: 2019-06-15, good fight between Tyson Fury and Tom Schwarz: it gets three stars.

Both undefeated, the former IBF, IBO, WBA and WBO Hw champ Tyson Fury entered this fight with a boxing record of 27-0-1 (19 knockouts) and he is ranked as the No.4 heavyweight in the world (currently the #1 in this division is Andy Ruiz Jr who beat Anthony Joshua two week ago, Anthony Joshua vs Andy Ruiz Jr) while his opponent, Tom Schwarz, has a perfect record of 24-0-0 (16 knockouts) and he entered as the No.56 in the same weight class. In their last three fights Fury has won over Sefer Seferi (Tyson Fury vs Sefer Seferi) and Francesco Pianeta (Tyson Fury vs Francesco Pianeta) but then he tied with Deontay Wilder (Deontay Wilder vs Tyson Fury) while Schwarz has beat Julian Fernandez, Christian Lewandowski and Kristijan Krstacic (Tom Schwarz vs Kristijan Krstacic). Fury vs Schwarz is the main event of the evening. Watch the video and rate this fight!