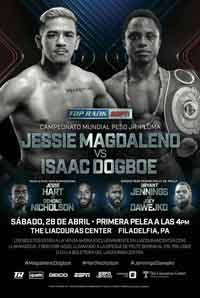 Review by AllTheBestFights.com: 2018-04-28, disappointing fight between Jesse Hart and Demond Nicholson: it gets two stars.

Jesse Hart entered this fight with a pro boxing record of 23-1-0 (19 KOs=83%) and he is ranked as the No.7 super middleweight in the world (currently the #1 in this division is George Groves). He lost to Gilberto Ramirez Sanchez last year (Gilberto Ramirez Sanchez vs Jesse Hart) but he came back to win in 2018 with Thomas Awimbono (Jesse Hart vs Thomas Awimbono).
His opponent, Demond Nicholson, has a record of 18-2-1 (17 KOs=94%) and he entered as the No.73 in the same weight class. He fought twice last year losing to Steve Rolls and defeating Josue Obando. Hart vs Nicholson is valid for the vacant NABF super middleweight title; undercard of Jessie Magdaleno vs Isaac Dogboe. Watch the video and rate this fight!