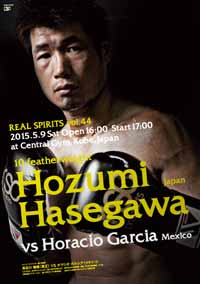 Review by AllTheBestFights.com: 2015-05-09, pretty good fight between Hozumi Hasegawa and Horacio Garcia: it gets three stars.

The former Wbc bantamweight and featherweight world champion Hozumi Hasegawa entered this fight with a professional boxing record of 33-5-0 (15 knockouts) but he is not ranked as he hasn’t fought since April 23, 2014 when he was defeated by Kiko Martinez (in one of the best boxing fights of 2014, Martinez vs Hasegawa).
His opponent, the undefeated Horacio Garcia, has a perfect record of 29-0-0 (21 knockouts) and he entered as the No.25 super bantamweight; he has already fought once in 2015 beating Jose Cen Torres. Hasegawa vs Garcia is the main event of the evening. Watch the video and rate this fight!