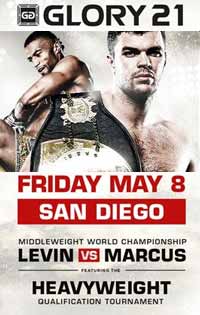 The black belt in American kenpo, karate and tae-kwon-do Raymond Daniels entered this fight with a pro kickboxing record of 6-2-0 (5 knockouts) and he is ranked as the No.6 super middleweight in the world while his opponent, Justin Baesman, is at his professional kickboxing debut (he is a mma fighter with a record of 16-7-1). ‘The Real Deal’ Daniels has already fought twice in 2015 beating Jonatan Oliveira (=Daniels vs Oliveira) but then he lost to Nieky Holzken (final of the Glory 19 Ww contender tournament, Holzken vs Daniels). Daniels vs Baesman is on the undercard of Artem Levin vs Simon Marcus 2 – Glory 21. Watch the video and rate this fight!