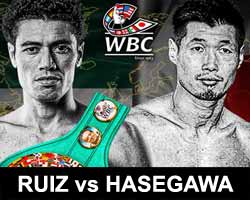 Review by AllTheBestFights.com: 2016-09-16, some good exchanges between Hugo Ruiz and Hozumi Hasegawa but it is not enough to get three stars, it gets two.

The Wbc champion Hugo Ruiz entered this fight with a pro boxing record of 36-3-0 (32 KOs=89%) and he is ranked as the No.7 super bantamweight in the world (currently the #1 in this division is Scott Quigg). He lost to Julio Ceja last year (=Ceja vs Ruiz) bu then he has won the rematch in 2016 (=Ceja vs Ruiz 2).
His opponent, the former Wbc Bw and Fw champion Hozumi Hasegawa, has a record of 35-5-0 (15 knockouts) and he entered as the No.10 in the same weight class. He suffered his last defeat when he faced Kiko Martinez in 2014 (45-stars fight, Martinez vs Hasegawa), after this bout he has won over Horacio Garcia (=Hasegawa vs Garcia) and Carlos Andres Ruiz Machuca (=Hasegawa vs Ruiz). Ruiz vs Hasegawa is valid for the WBC World super bantamweight title (Ruiz’s first defense); undercard of Shinsuke Yamanaka vs Anselmo Moreno 2. Watch the video and rate this fight!