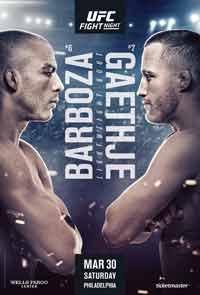 Review by AllTheBestFights.com: 2019-03-30, good start between David Branch and Jack Hermansson: it gets three stars (UFC Performance of the Night).

The black belt in Bjj, former Wsof light-Hw and Mw champion David Branch entered this fight with a record of 22-5-0 (59% finishing rate) and he is ranked as the No.14 middleweight in the world but he lost two out of his last three fights, against Luke Rockhold (Luke Rockhold vs David Branch) and Jared Cannonier (David Branch vs Jared Cannonier); between these two bouts he beat Thiago Santos (David Branch vs Thiago Santos).
His opponent, Jack Hermansson, has a mma record of 18-4-0 (83% finishing rate) and he entered as the No.19 in the same weight class. He was defeated by Thiago Santos in 2017 (Thiago Santos vs Jack Hermansson) but then he has won over Thales Leites and Gerald Meerschaert. Branch vs Hermansson is on the undercard of Edson Barboza vs Justin Gaethje – UFC on ESPN 2. Watch the video and rate this fight!