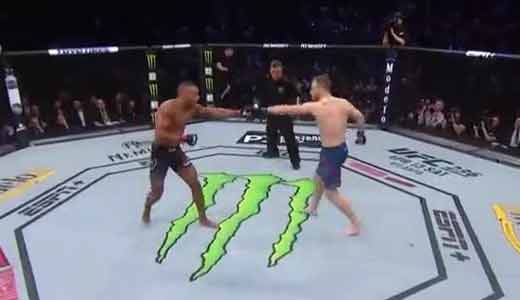 Review by AllTheBestFights.com: 2019-03-30, wild exchanges and a great finish: Edson Barboza vs Justin Gaethje is one of the best mma fights of the year 2019 and it gets four stars (UFC Fight of the Night).

The black belt in tae-kwon-do Edson Barboza entered this fight with a pro record of 20-6-0 (65% finishing rate) and he is ranked as the No.9 lightweight in the world. He lost two consecutive fights between 2017 and 2018, against current #1 Ufc Lw champ Khabib Nurmagomedov (Khabib Nurmagomedov vs Edson Barboza) and Kevin Lee (Edson Barboza vs Kevin Lee), but then he has beat Dan Hooker (Edson Barboza vs Dan Hooker).
His opponent, the former Wsof Lw champion Justin Gaethje, has an official mma record of 19-2-0 (89% finishing rate) and he entered as the No.11 in the same weight class. He also lost two out of his last three bouts, losing to Eddie Alvarez (Eddie Alvarez vs Justin Gaethje) and Dustin Poirier (4-stars fight, Dustin Poirier vs Justin Gaethje), but in his last fight he has won over James Vick (Justin Gaethje vs James Vick). Barboza vs Gaethje is the main event of UFC on ESPN 2. Watch the video and rate this fight!