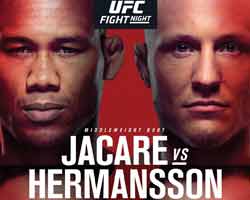 Review by AllTheBestFights.com: 2019-04-27, some good exchanges between Ronaldo Jacare Souza and Jack Hermansson but it is not enough to get three stars: it gets two.

The black belt in Bjj, judo and former Strikeforce Mw champion Ronaldo Jacare Souza entered this fight with a professional mma record of 26-6-0 (85% finishing rate) and he is ranked as the No.5 middleweight in the world (currently the #1 in this division is Robert Whittaker). He fought three times last year beating Derek Brunson (Ronaldo Jacare Souza vs Derek Brunson 2) and Chris Weidman (Chris Weidman vs Ronaldo Jacare Souza) but between these two bouts he lost to Kelvin Gastelum (Kelvin Gastelum vs Ronaldo Jacare Souza).
His opponent, Jack Hermansson, has an official record of 19-4-0 (84% finishing rate) and he entered as the No.11 in the same weight class. He was defeated by Thiago Santos in 2017 (Thiago Santos vs Jack Hermansson) but then he has won over Thales Leites, Gerald Meerschaert and David Branch (David Branch vs Jack Hermansson). Jacare Souza vs Hermansson is the main event of UFC Fight Night 150 (UFC on ESPN+ 8). Watch the video and rate this fight!