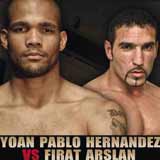 Review: 2014-08-16, nice and close fight between Yoan Pablo Hernandez and Firat Arslan: it gets three stars. Yoan Pablo Hernandez entered this fight with a professional boxing record of 28-1-0 (14 knockouts) and he is ranked as the No.1 cruiserweight in the world, he fought just once in 2013 beating Alexander Alekseev and defending his Ibf belt (=Hernandez vs Alekseev).
His opponent, the 43-year-old Firat Arslan (14 years older than Hernandez), has an official record of 34-7-2 (21 knockouts) and he entered as the No.21 in the same weight class, he has already fought twice in 2014 losing to Marco Huck in January (=Huck vs Arslan 2) and winning over Tamas Bajzath in june. Hernandez vs Arslan is valid for the IBF cruiserweight title (Hernandez’s fourth defense). Watch the video and rate this fight!