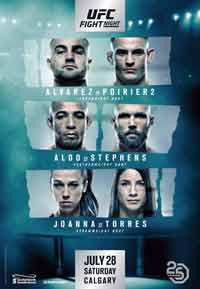 Review by AllTheBestFights.com: 2018-07-28, pretty good fight between Olivier Aubin-Mercier and Alexander Hernandez: it gets three stars.

The black belt in judo Olivier Aubin-Mercier entered this fight with a professional record of 11-2-0 (82% finishing rate) and he is ranked as the No.19 lightweight in the world. He lost to Carlos Diego Ferreira in 2016 but then he has won four fights winning over Thibault Gouti, Drew Dober, Tony Martin and Evan Dunham (Evan Dunham vs Olivier Aubin-Mercier).
His opponent, Alexander Hernandez, has a mma record of 9-1-0 (67% finishing rate) and he entered as the No.16 in the same weight class. He suffered his only loss when he faced Jamall Emmers in 2013, since then he has won seven consecutive bouts beating Beneil Dariush in 2018. Aubin-Mercier vs Hernandez is on the undercard of Eddie Alvarez vs Dustin Poirier 2 – UFC on Fox 30. Watch the video and rate this fight!

(Free embeddable video hosted on Youtube and not uploaded by AllTheBestFights)
https://www.youtube.com/watch?v=i-TNzD6lzIo