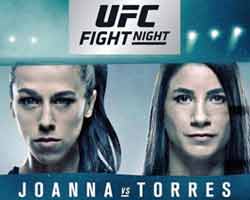 The former Wkn kickboxing and Ufc champion Joanna Jedrzejczyk entered this fight with a mma record of 14-2-0 (36% finishing rate) and she is ranked as the No.3 women’s strawweight in the world but she comes off two consecutive losses, suffered against current #1 Rose Namajunas (Joanna Jedrzejczyk vs Rose Namajunas I and Rose Namajunas vs Joanna Jedrzejczyk II); before these two bouts, in May 2017, she had beat Jessica Andrade (Jedrzejczyk vs Andrade).
Her opponent, the black belt in karate and tae-kwon-do Tecia Torres, has an official record of 10-2-0 (10% submission victory rate – she has never won via ko/tko) and she entered as the No.10 in the same weight class but she lost to Jessica Andrade in February (Jessica Andrade vs Tecia Torres); before this fight, in 2017, she had won over Bec Rawlings, Juliana Lima and Michelle Waterson. Jedrzejczyk vs Torres is on the undercard of Eddie Alvarez vs Dustin Poirier 2 – UFC on Fox 30. Watch the video and rate this fight!

(Free embeddable video hosted on Youtube and not uploaded by AllTheBestFights)
https://www.youtube.com/watch?v=XkS1_L0nGcI