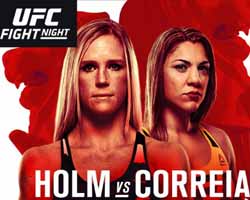 Review by AllTheBestFights.com: 2017-06-17, spectacular finish between Holly Holm and Bethe Correia: it is close to get four stars (UFC Performance of the Night).