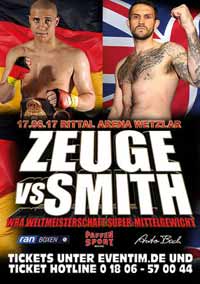 Review by AllTheBestFights.com: 2017-06-17, fight not so exciting between Tyron Zeuge and Paul Smith: it gets two stars.

The undefeated Wba super-Mw champion Tyron Zeuge entered this fight with a professional boxing record of 20-0-1 (11 knockouts) and he is ranked as the No.11 super middleweight in the world. He drew with Giovanni De Carolis in 2016 (=Zeuge vs De Carolis I) but then he has beat him in their rematch (=De Carolis vs Zeuge II) and defeated Isaac Ekpo in 2017 (=Zeuge vs Ekpo).
His opponent, Paul Smith, has an official record of 38-6-0 (22 knockouts) and he entered as the No.36 in the same weight class. He lost three consecutive bouts between 2014 and 2015, the last one with Andre Ward (=Ward vs Smith), but then he has won over Bronislav Kubin, Bartlomiej Grafka and Daniel Regi. Tyron Zeuge vs Paul Smith is valid for the WBA World super middleweight title (Zeuge’ second defense). Watch the video and rate this fight!