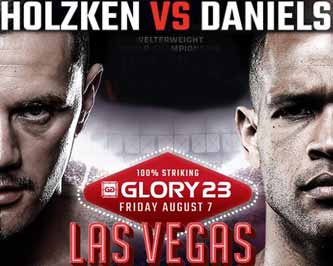 Review by AllTheBestFights.com: 2015-08-07, great performance by both fighters: Nieky Holzken vs Raymond Daniels 2 gets three stars.

Nieky Holzken entered this fight with a professional kickboxing record of 91-11-0 (53 knockouts) and he is ranked as the No.1 super middleweight in the world. He suffered his last defeat in 2012 when he faced L’houcine Ouzgni, since then he has won seven consecutive bouts winning the Glory Ww tournament in 2013 beating Joseph Valtellini in the final (=Valtellini vs Holzken) and winning over Daniels in his last fight (final of the Glory Ww contender tournament, Holzken vs Daniels).
His opponent, the black belt in karate and tae-kwon-do Raymond Daniels (who replaces Joseph Valtellini due to a health issue), has an official record of 7-2-0 (6 knockouts) and he entered as the No.4 in the same weight class. He has already fought three times in 2015 beating Jonatan Oliveira (=Daniels vs Oliveira) and Justin Baesman (=Daniels vs Baesman) but between these two bouts he lost to Holzken in their first fight. Holzken vs Daniels 2, main event of Glory 23, is valid for the vacant Glory welterweight title. Watch the video and rate this fight!