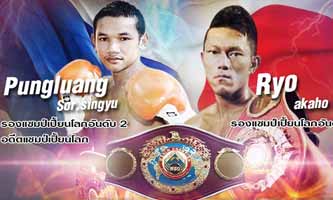 Review by AllTheBestFights.com: 2015-08-07, good fight between Pungluang Sor Singyu and Ryo Akaho: it gets three stars.

The former Wbo Bw champion Pungluang Sor Singyu entered this fight with a professional boxing record of 50-3-0 (34 knockouts) and he is ranked as the No.7 bantamweight in the world (currently the #1 in this division is Shinsuke Yamanaka). He suffered his last loss in 2014 when he faced Tomoki Kameda, after this fight he has won four bouts beating Nouldy Manakane in his last one.
His opponent, Ryo Akaho, has an official record of 26-1-2 (18 knockouts) and he entered as the No.28 in the same weight class. His only loss occurred in 2012, against Yota Sato, since then he has collected seven consecutive victories winning over Prosper Ankrah in his last bout. Singyu vs Akaho is valid for the vacant WBO World bantamweight title. Watch the video and rate this fight!