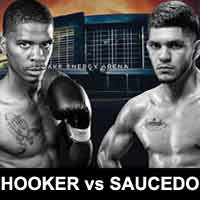 Review by AllTheBestFights.com: 2018-11-16, great fight between Maurice Hooker and Alex Saucedo: it gets three stars.

Both undefeated, the Wbo light-Ww champion Maurice Hooker entered this fight with a professional boxing record of 24-0-3 (16 knockouts) and he is ranked as the No.8 super lightweight in the world (currently the #1 in this division is Regis Prograis) while his opponent, Alex Saucedo, has a perfect record of 28-0-0 (18 knockouts) and he entered as the No.15 in the same weight class. ‘Mighty Mo’ Hooker was stopped in a draw by Darleys Perez in 2016 but then he has beat Cristobal Cruz, Courtney Jackson and Terry Flanagan (Terry Flanagan vs Maurice Hooker) while Saucedo has won over Gustavo David Vittori, Abner Lopez and Leonardo Zappavigna in his last three (four-stars fight, Alex Saucedo vs Leonardo Zappavigna). Hooker vs Saucedo is valid for the WBO World super lightweight title (Hooker’s first defense). Watch the video and rate this fight!