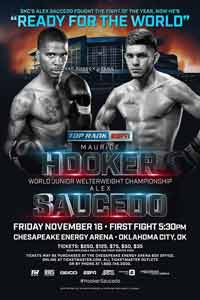 Review by AllTheBestFights.com: 2018-11-16, fight not so exciting between Egidijus Kavaliauskas and Roberto Arriaza: it gets two stars.

Both undefeated, the two times Olympian Egidijus Kavaliauskas entered this fight with a perfect boxing record of 20-0-0 (16 KOs=80%) and he is ranked as the No.13 welterweight in the world while his opponent, Roberto Arriaza, has an official record of 17-0-0 (13 KOs=76%) and he entered as the No.38 in the same weight class. In their last three bouts Kavaliauskas has beat Mahonry Montes, David Avanesyan (David Avanesyan vs Egidijus Kavaliauskas) and Juan Carlos Abreu (Egidijus Kavaliauskas vs Juan Carlos Abreu) while Arriaza has won over Francisco Cordero, Sammy Valentin and Juan Ruiz. Kavaliauskas vs Arriaza is valid for the NABF and WBO Inter-Continental welterweight titles and it is on the undercard of Maurice Hooker vs Alex Saucedo. Watch the video and rate this fight!