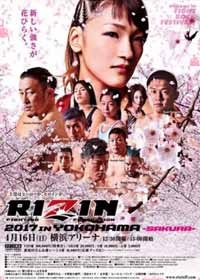 Review by AllTheBestFights.com: 2017-04-16, some good exchanges between Kyoji Horiguchi and Yuki Motoya but it is not enough to get three stars: it gets two.

The black belt in karate Kyoji Horiguchi entered this fight with a professional record of 18-2-0 (56% finishing rate) and he is ranked as the No.3 flyweight in the world. He lost to #1 Ufc Flw champion Demetrious Johnson in 2015 (=Johnson vs Horiguchi), but then he has won over Chico Camus (=Horiguchi vs Camus), Neil Seery and Ali Bagautinov (=Horiguchi vs Bagautinov).
His opponent, Yuki Motoya, has a mma record of 18-4-0 (61% finishing rate) and he entered as the No.38 in the same weight class. He suffered his last loss when he faced Tatsumitsu Wada in 2013, since then he has collected ten victories and one no-contest. Kyoji Horiguchi vs Yuki Motoya is on the undercard of Tatsuya Kawajiri vs Anthony Birchak – Rizin FF 5 Sakura. Watch the video and rate this fight!