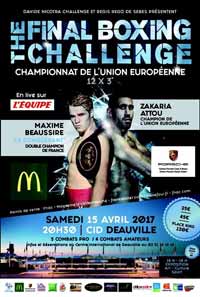 Review by AllTheBestFights.com: 2017-04-15, close fight but not so exciting: Maxime Beaussire vs Zakaria Attou gets two stars.

The undefeated Maxime Beaussire entered this fight with a pro boxing record of 23-0-1 (7 knockouts) and he is ranked as the No.21 super welterweight in the world. He has already fought once in 2017 beating Arnaud Dimidschtein.
His opponent, Zakaria Attou, has a record of 24-6-2 (7 knockouts) and he entered as the No.39 in the same weight class. He lost to Roberto Santos in 2015 but then he has collected five victories and one draw. Maxime Beaussire vs Zakaria Attou is valid for the EBU-EU (European Union) super welterweight title. Watch the video and rate this fight!