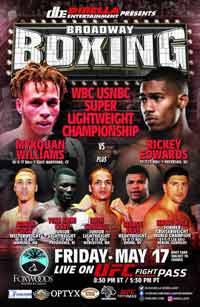 Review by AllTheBestFights.com: 2019-05-17, disappointing fight between Marco Huck and Nick Guivas: it gets two stars.

The former Wbo and Ibo Cw champion Marco Huck entered this fight with a boxing record of 41-5-1 (28 knockouts) and he is ranked as the No.22 heavyweight in the world. He lost two consecutive bouts in 2017, against Mairis Briedis (Huck vs Briedis) and Oleksandr Usyk (Oleksandr Usyk vs Marco Huck), but then he came back to win with Yakup Saglam in 2018 (Marco Huck vs Yakup Saglam).
His opponent, Nick Guivas, has an official record of 14-10-3 (9 knockouts) and he entered as the No.452 in the same weight class but he comes off the loss against Eric Molina; before this bout, in 2018, he tied with Brian Imes. Huck vs Guivas is on the undercard of Mykquan Williams vs Rickey Edwards. Watch the video and rate this fight!

Result: Click here to show the fight’s result
Marco Huck vs Nick Guivas (No contest, round 1)