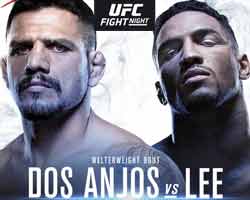 The black belt in Brazilian jiu-jitsu and former Ufc Lw champion Rafael dos Anjos entered this fight with a professional record of 28-11-0 (50% finishing rate) and he is ranked as the No.6 welterweight in the world but he comes off two consecutive losses, against current #1 Ufc Ww champ Kamaru Usman (Rafael dos Anjos vs Kamaru Usman) and Colby Covington (Rafael dos Anjos vs Colby Covington); before these two bouts RDA had beat Robbie Lawler (Robbie Lawler vs Rafael dos Anjos).
His opponent, Kevin Lee, has a mma record of 17-4-0 (59% finishing rate) and he entered as the No.9 lightweight but he lost two out of his last three fights, against Tony Ferguson (Tony Ferguson vs Kevin Lee) and Al Iaquinta (Kevin Lee vs Al Iaquinta 2); between these two bouts he beat Edson Barboza (Edson Barboza vs Kevin Lee). Dos Anjos vs Lee is the main event of UFC Fight Night 152 (UFC on ESPN+ 10). Watch the video and rate this fight!