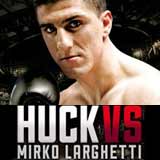 Review: 2014-08-30, fight not so exciting between Marco Huck and Mirko Larghetti: it gets two stars. Marco Huck entered this fight with a professional boxing record of 37-2-1 (26 knockouts) and he is ranked as the No.1 cruiserweight in the world, he suffered his last defeat in 2012 when he moved up in weight class to the heavyweight division and faced Alexander Povetkin for the Wba world title (he lost by majority decision but it was controversial Povetkin vs Huck), since then he has collected one draw, against Ola Afolabi (=Huck vs Afolabi 2), and three consecutive wins.
His opponent, the undefeated Mirko Larghetti, has a perfect record of 21-0-0 (13 knockouts) and he entered as the No.37 in the same weight class, but he has not faced any notable opponents in his professional career. Huck vs Larghetti is valid for the WBO cruiserweight title (belt held by Huck), first world title shot for Larghetti. Watch the video and rate this fight!