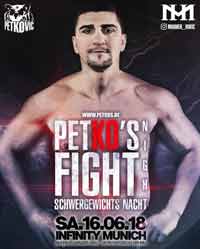 Review by AllTheBestFights.com: 2018-06-16, fight not particularly good between Marco Huck and Yakup Saglam: it gets two stars.

The former Wbo and Ibo Cw champion Marco Huck entered this fight with a record of 40-5-1 (27 knockouts) and he is ranked as the No.8 cruiserweight in the world but he comes off two consecutive losses, against Mairis Briedis (Huck vs Briedis) and current #1 Cw Oleksandr Usyk (Oleksandr Usyk vs Marco Huck); before these two bouts he had defeated Dmytro Kucher (Huck vs Kucher).
His opponent, Yakup Saglam, has a record of 40-4-0 (37 KOs=92%) and he entered as the No.138 heavyweight. He suffered his last loss when he faced Joseph Parker in 2015 (Joseph Parker vs Yakup Saglam), since then he has won six consecutive fights beating Sebastian Tuchscherer in his last one. Huck vs Saglam is the main event of the evening. Watch the video and rate this fight!

(Free embeddable video hosted on Youtube and not uploaded by AllTheBestFights)
https://www.youtube.com/watch?v=e8Ppta1lZyc