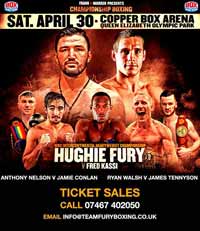 Review by AllTheBestFights.com: 2016-04-30, boring fight between Hughie Fury and Fred Kassi: it gets one star!

The undefeated Hughie Fury, cousin of #1 Hw Tyson Fury, entered this fight with a perfect boxing record of 19-0-0 (10 knockouts) and he is ranked as the No.41 heavyweight in the world. He has already fought once in 2016 beating Dominick Guinn.
His opponent, Fred Kassi, has a record of 18-4-1 (10 knockouts) and he entered as the No.104 in the same weight class. His last victory occurred in 2013 when he won over Shannon Caudle, after this bout he lost to Amir Mansour (=Mansour vs Kassi), he drew with Chris Arreola (=Arreola vs Kassi) and lost again, with Dominic Breazeale (=Breazeale vs Kassi). Fury vs Kassi is valid for the vacant WBO International heavyweight title. Watch the video and rate this fight!