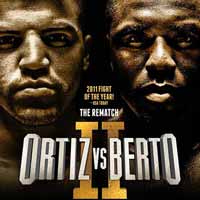 Review by AllTheBestFights.com: 2016-04-30, pretty good finish but the rest of the fight was quite boring: Victor Ortiz vs Andre Berto 2 gets two stars.

The former Wbc, Wba and Ibf Ww champion Andre Berto entered this fight with a professional record of 30-4-0 (23 knockouts) and he is ranked as the No.26 welterweight in the world. He fought twice last year beating Josesito Lopez (=Berto vs Lopez) but then he lost to Floyd Mayweather Jr (=Mayweather vs Berto).
His opponent, the former Wbc Ww champion Victor Ortiz, has an official boxing record of 31-5-2 (24 knockouts) and he entered as the No.51 super welterweight. He suffered three consecutive losses between 2011 and 2014, the last one against Luis Collazo (=Ortiz vs Collazo), but then he has won over Manuel Perez and Gilberto Sanchez Leon. In their first fight, Ortiz defeated Berto by unanimous decision (The Ring magazine Fight of the Year 2011, Ortiz vs Berto I); this second bout is the main event of the evening. Watch the video and rate this fight!