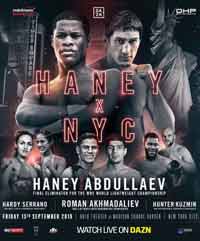 Review by AllTheBestFights.com: 2019-09-13, fight not so exciting between Michael Hunter and Sergey Kuzmin: it gets two stars.

The former Olympian Michael Hunter entered this fight with a boxing record of 17-1-0 (12 knockouts) and he is ranked as the No.36 heavyweight in the world. He suffered his only loss when he faced Oleksandr Usyk in 2017 (Oleksandr Usyk vs Michael Hunter), after this bout he has won five bouts defeating Alexander Ustinov (Michael Hunter vs Alexander Ustinov) and Fabio Maldonado in his last two (Michael Hunter vs Fabio Maldonado).
His opponent, the undefeated Sergey Kuzmin, has a perfect record of 15-0-0 (11 knockouts) and he entered as the No.31 in the same weight class. In his last three fights he has won over David Price (Sergey Kuzmin vs David Price), LaRon Mitchell (Sergey Kuzmin vs LaRon Mitchell) and Joey Dawejko. Hunter vs Kuzmin is valid for the WBA Inter-Continental heavyweight title; undercard of Devin Haney vs Zaur Abdullaev. Watch the video and rate this fight!