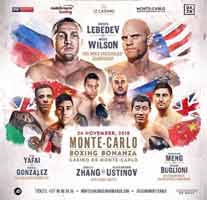 Review by AllTheBestFights.com: 2018-11-24, disappointing fight with too many interruptions: Michael Hunter vs Alexander Ustinov gets one star!

The former Olympian Michael Hunter entered this fight with a record of 15-1-0 (10 knockouts) and he is ranked as the No.31 heavyweight in the world. He suffered his only loss when he faced Oleksandr Usyk last year (Oleksandr Usyk vs Michael Hunter), after this bout he has won over Terrell Jamal Woods, Iago Kiladze and Martin Bakole Ilunga.
His opponent, Alexander Ustinov, has a boxing record of 34-2-0 (25 knockouts) and he entered as the No.57 in the same weight class. He fought twice in 2017 defeating Raphael Zumbano and losing to Manuel Charr (Manuel Charr vs Alexander Ustinov). Hunter vs Ustinov is valid for the vacant WBA International heavyweight title; undercard of Denis Lebedev vs Mike Wilson. Watch the video and rate this fight!