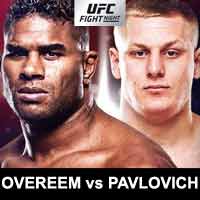 Review by AllTheBestFights.com: 2018-11-24, pretty good finish between Alistair Overeem and Sergey Pavlovich: it gets three stars.

The former K-1, Strikeforce and Dream world champion Alistair Overeem entered this fight with a pro mma record of 43-17-0 (88% finishing rate) and he is ranked as the No.7 heavyweight in the world (currently the #1 in this division is Daniel Cormier) but he comes off two consecutive losses, suffered against Francis Ngannou (Alistair Overeem vs Francis Ngannou) and Curtis Blaydes (Alistair Overeem vs Curtis Blaydes); before these two bouts he had beat Fabricio Werdum (Werdum vs Overeem 3).
His opponent, the undefeated Sergey Pavlovich, has a perfect record of 12-0-0 (75% ko/tko victory rate – he has never won via submission) and he entered as the No.33 in the same weight class. He fought twice last year winning over Mikhail Mokhnatkin (Sergey Pavlovich vs Mikhail Mokhnatkin) and Kirill Sidelnikov. Overeem vs Pavlovich is on the undercard of Curtis Blaydes vs Francis Ngannou 2 – UFC Fight Night 141. Watch the video and rate this fight!