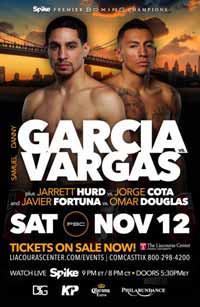 Review by AllTheBestFights.com: 2016-11-12, nice exchanges between Jarrett Hurd and Jo Jo Dan: it gets three stars.

The undefeated Jarrett Hurd entered this fight with a boxing record of 18-0-0 (12 knockouts) and he is ranked as the No.27 super welterweight in the world. In his last two bouts he has won over Frank Galarza (=Galarza vs Hurd) and Oscar Molina.
His opponent, Ionut Dan Ion, has an official record of 35-3-0 (18 knockouts) but he is not ranked as he hasn’t fought since September 11, 2015 when he defeated Rafal Jackiewicz. Before this bout he had lost to Kell Brook (=Brook vs Jo Jo Dan). Hurd vs Jo Jo Dan is on the undercard of Danny Garcia vs Samuel Vargas. Watch the video and rate this fight!