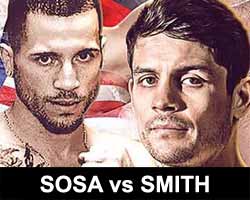 The Wba champion Jason Sosa entered this fight with a pro boxing record of 19-1-4 (15 KOs=79%) and he is ranked as the No.1 super featherweight in the world. He suffered his only loss at his fifth professional fight in 2010, against Tre’Sean Wiggins, since then he has collected 16 victories and 3 draws, drawing with Nicholas Walters in 2015 (=Walters vs Sosa) and beating Javier Fortuna in 2016 (=Fortuna vs Sosa).
His opponent, Stephen Smith, has a record of 24-2-0 (14 knockouts) and he entered as the No.17 in the same weight class. He has fought twice in 2016 losing to Jose Pedraza (=Pedraza vs Smith) and winning over Daniel Eduardo Brizuela. ‘El Canito’ Sosa vs Smith is valid for the WBA World super featherweight (Sosa’s first defense); undercard of Luis Ortiz vs Malik Scott. Watch the video and rate this fight!