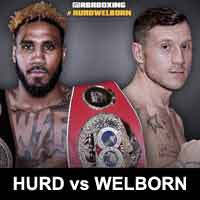 Review by AllTheBestFights.com: 2018-12-01, good exchanges between Jarrett Hurd and Jason Welborn: it gets three stars.

The undefeated Ibf, Ibo and Wba super-Ww champion Jarrett Hurd entered this fight with a perfect boxing record of 22-0-0 (15 knockouts) and he is ranked as the No.1 super welterweight in the world. In his last three bouts he has won over Tony Harrison (Hurd vs Harrison), Austin Trout (Jarrett Hurd vs Austin Trout) and Erislandy Lara (via split decision, Erislandy Lara vs Jarrett Hurd).
His opponent, Jason Welborn, has a record of 24-6-0 (7 knockouts) and he entered as the No.33 in the same weight class. He lost two consecutivve bouts in 2016, against William Warburton and Craig Cunningham, but since then he has won five bouts beating twice Tommy Langford in 2018. Hurd vs Welborn is valid for the IBF, IBO and WBA Super World super welterweight title; undercard of Deontay Wilder vs Tyson Fury. Watch the video and rate this fight!