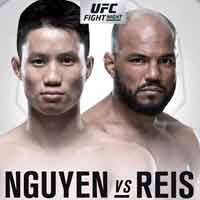 Review by AllTheBestFights.com: 2018-12-02, fight not so exciting between Ben Nguyen and Wilson Reis: it gets two stars.

The black belt in tae-kwon-do Ben Nguyen entered this fight with a pro record of 16-7-0 (81% finishing rate) and he is ranked as the No.13 flyweight in the world but he comes off the loss against Jussier Formiga da Silva (Jussier Formiga da Silva vs Ben Nguyen); before this bout, in 2017, he had beat Tim Elliott (Tim Elliott vs Ben Nguyen).
His opponent, the black belt in Brazilian jiu-jitsu Wilson Reis, has a mma record of 22-9-0 (45% submission victory rate – he has never won via ko/tko) and he entered as the No.17 in the same weight class but he comes off three consecutive losses: against Demetrious Johnson (Johnson vs Reis), current #1 Flw champ Henry Cejudo (Henry Cejudo vs Wilson Reis) and John Moraga (John Moraga vs Wilson Reis). Nguyen vs Reis is on the undercard of Junior dos Santos vs Tai Tuivasa – UFC Fight Night 142. Watch the video and rate this fight!