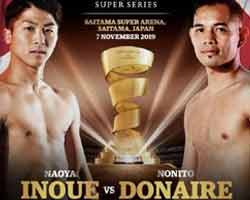 Review by AllTheBestFights.com: 2019-11-07, great performance by both boxers: Naoya Inoue vs Nonito Donaire is close to get four stars!

The undefeated world champion in three different weight classes Naoya Inoue entered this fight with a perfect boxing record of 18-0-0 (16 KOs=89%) and he is ranked as the No.1 bantamweight in the world. In his last three bouts ‘Monster’ Inoue has won over Jamie McDonnell (Jamie McDonnell vs Naoya Inoue), Juan Carlos Payano (Naoya Inoue vs Juan Carlos Payano) and Emmanuel Rodriguez (Naoya Inoue vs Emmanuel Rodriguez).
His opponent, the world champion in five different weight classes Nonito Donaire, has an official record of 40-5-0 (26 knockouts) and he entered as the No.3 in the same weight class. He lost to Carl Frampton last year (Carl Frampton vs Nonito Donaire) but then he has beat Ryan Burnett (who retired due to a back injury, Ryan Burnett vs Nonito Donaire) and Stephon Young (Nonito Donaire vs Stephon Young). Inoue vs Donaire is the final of the World Boxing Super Series bantamweight tournament (WBSS – Muhammad Ali Trophy) and it is valid for the WBA and IBF World bantamweight titles; they also faced each other a second time in June 7, 2022 (Naoya Inoue vs Nonito Donaire 2). Watch the video and rate this fight!