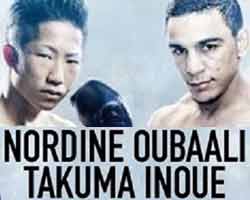 Review by AllTheBestFights.com: 2019-11-07, pretty good fight between Nordine Oubaali and Takuma Inoue: it gets three stars.

Both undefeated, the two-time Olympian and WBC Bw champion Nordine Oubaali entered this fight with a perfect record of 16-0-0 (12 KOs=75%) and he is ranked as the No.5 bantamweight in the world (currently the #1 in this division is Naoya Inoue, older brother of Takuma) while his opponent, the interim Wbc Bw champ Takuma Inoue, has a boxing record of 13-0-0 (3 knockouts) and he entered as the No.4 in the same weight class. In their last three fights Oubaali has won over Luis Melendez (Nordine Oubaali vs Luis Melendez), Rau’shee Warren (Rau’shee Warren vs Nordine Oubaali) and Arthur Villanueva (Nordine Oubaali vs Arthur Villanueva) while Inoue has beat Waldo Sabu, Mark John Yap (Mark John Yap vs Takuma Inoue) and Petch Sor Chitpattana (also known as Tasana Salapat, Takuma Inoue vs Petch Sor Chitpattana). Oubaali vs Inoue is valid for the WBC World bantamweight title (Oubaali’s second defense); undercard of Naoya Inoue vs Nonito Donaire. Watch the video and rate this fight!