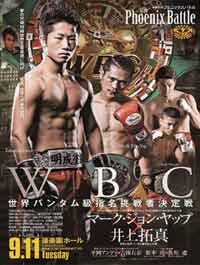 Review by AllTheBestFights.com: 2018-09-11, fight not so exciting between Mark John Yap and Takuma Inoue: it gets two stars.

Mark John Yap entered this fight with a professional boxing record of 29-12-0 (14 knockouts) and he is ranked as the No.7 bantamweight in the world (currently the #1 in this division is Naoya Inoue). He suffered three consecutive defeats between 2013 and 2014, against Naoto Uebayashi, Hirofumi Mukai and Yuta Uetani, but since then he has won ten bouts beating Takafumi Nakajima in 2018.
His opponent, the undefeated Takuma Inoue (younger brother of Naoya Inoue), has a perfect record of 11-0-0 (3 knockouts) and he entered as the No.9 in the same weight class. In his last three fights he has won over Hiroyuki Kudaka, Kentaro Masuda and Waldo Sabu. Yap vs Inoue is valid for the WBC bantamweight title eliminator. Watch the video and rate this fight!

(Free embeddable video hosted on Youtube and not uploaded by AllTheBestFights)
https://www.youtube.com/watch?v=H5noE8bnJSQ