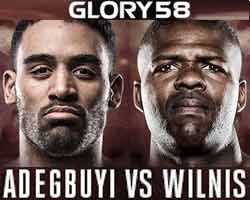 Review by AllTheBestFights.com: 2018-09-14, nice and tough exchanges between Benjamin Adegbuyi and Jahfarr Wilnis 2: it gets three stars.

Benjamin Adegbuyi entered this fight with a pro kickboxing record of 30-5-0 (18 knockouts) and he is ranked as the No.2 heavyweight in the world. He lost to Guto Inocente last year (Benjamin Adegbuyi vs Guto Inocente) but he came back to win in 2018 against D’Angelo Marshall and Junior Tafa.
His opponent, the former Kunlun and Enfusion Hw champion Jahfarr Wilnis, has a record of 31-9-1 (8 knockouts) and he entered as the No.11 in the same weight class but he lost three out of his last four bouts: against Ismael Londt (Ismael Londt vs Jahfarr Wilnis), Mladen Brestovac and Luis Tavares; in his last fight he has beat Jamal Ben Saddik. In their first bout Adegbuyi had beat Wilnis via split decision (October 9, 2015 – Benjamin Adegbuyi vs Jahfarr Wilnis); this second fight is on the undercard of Alex Pereira vs Simon Marcus 2 – Glory 58. Watch the video and rate this fight!