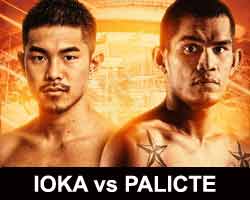 Review by AllTheBestFights.com: 2019-06-19, pretty good finish but the rest of the fight was not so exciting: Kazuto Ioka vs Aston Palicte gets two stars.

The former world champion in three different weight classes Kazuto Ioka entered this fight with a professional boxing record of 23-2-0 (13 knockouts) and he is ranked as the No.6 super flyweight in the world (currently the #1 in this division is Juan Francisco Estrada) but he comes off the loss against Donnie Nietes (Donnie Nietes vs Kazuto Ioka); before this bout, he had beat McWilliams Arroyo in 2018 (Kazuto Ioka vs McWilliams Arroyo) and Nare Yianleang in 2017.
His opponent, Aston Palicte, has an official record of 25-2-1 (21 KOs=84%) and he entered as the No.10 in the same weight class. He tied with Nietes last year (Donnie Nietes vs Aston Palicte) but he came back to win in 2019 against Jose Martinez (Aston Palicte vs Jose Martinez). Ioka vs Palicte is valid for the vacant WBO World super flyweight title. Watch the video and rate this fight!