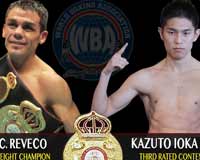 Review by AllTheBestFights.com: 2015-04-22, close fight but not so exciting: Juan Carlos Reveco vs Kazuto Ioka gets two stars.

Juan Reveco entered this fight with a professional boxing record of 35-1-0 (19 knockouts) and he is ranked as the No.3 flyweight in the world (currently the #1 in this division is Roman Gonzalez). ‘Coton’ Reveco suffered his last defeat in 2007 when he faced Brahim Asloum losing his Wba light-Flw title, since then he has won 18 consecutive bouts winning the Wba Flw belt and defeating Yodmongkol Vor Saengthep in his last fight (=Reveco vs Yodmongkol).
His opponent, the former Wbc, Wba minimumweight and Wba light-Flw world champion Kazuto Ioka, has an official record of 16-1-0 (10 knockouts) and he entered as the No.13 in the same weight class. He fought three times last year losing to Amnat Ruenroeng (=Ioka vs Ruenroeng) but then he came back to win beating Pablo Carrillo (=Ioka vs Carrillo) and Jean Piero Perez (=Ioka vs Perez). Reveco vs Ioka is valid for the WBA World flyweight title (held by Reveco); they also faced each other a second time on December 31, 2015 (=Ioka vs Reveco II). Watch the video and rate this fight!