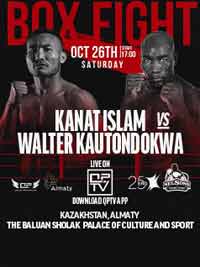 Review by AllTheBestFights.com: 2019-10-26, close fight but not so exciting: Kanat Islam vs Walter Kautondokwa gets two stars.

The undefeated former olympian Kanat Islam entered this fight with a perfect record of 26-0-0 (21 KOs=81%) and he is ranked as the No.42 super welterweight in the world. In his last three bouts he has won over Norberto Gonzalez, Brandon Cook (Kanat Islam vs Brandon Cook) and Julio De Jesus.
His opponent, Walter Kautondokwa, has a boxing record of 18-1-0 (17 KOs=94%) and he entered as the No.24 middleweight. He suffered his only loss when he faced Demetrius Andrade last year (Demetrius Andrade vs Walter Kautondokwa), after this bout he has beat Simeon Tcheta. Islam vs Kautondokwa is valid for the WBO International middleweight title. Watch the video and rate this fight!