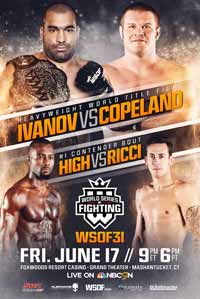 Review by AllTheBestFights.com: 2016-06-17, some good exchanges between Blagoy Ivanov and Josh Copeland but it is not enough to get three stars: it gets two.

The black belt in judo and former world combat sambo champion Blagoy Ivanov entered this fight with a pro record of 13-1-0 (85% finishing rate) and he is ranked as the No.21 heavyweight in the world. He suffered his only loss when he faced Alexander Volkov in 2014 (final of the Bellator Hw tournament – season ten – Volkov vs Ivanov), after this bout he beat Smealinho Rama in a fight valid for the Wsof Hw belt (=Rama vs Ivanov) and then he defended his title against Derrick Mehmen (=Ivanov vs Mehmen).
His opponent, Josh Copeland, has an official mma record of 12-3-0 (67% finishing rate) and he entered as the No.38 in the same weight class. He lost to Vitaly Minakov last year (=Minakov vs Copeland) but he came back to win in 2016 beating Mike Hayes. Ivanov vs Copeland, main event of the WSOF 31, is valid for the WSOF heavyweight title (Ivanov’s second defense). Watch the video and rate this fight!