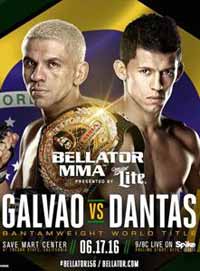 Review by AllTheBestFights.com: 2016-06-17, pretty good finish between Brandon Halsey and John Salter but it is not enough to get three stars: it gets two.

The former Bellator Mw champion Brandon Halsey entered this fight with a professional mma record of 9-1-0 (67% finishing rate) and he is ranked as the No.26 middleweight in the world. He fought twice last year beating Kendall Grove (=Halsey vs Grove) and losing to Rafael Carvalho (=Halsey vs Carvalho).
His opponent, John Salter, has an official record of 11-3-0 (100% finishing rate) but he is not ranked as he hasn’t fought since January 16, 2015 when he defeated Dustin Jacoby. Halsey vs Salter is on the undercard of Marcos Galvao vs Eduardo Dantas 2 – Bellator 156. Watch the video and rate this fight!