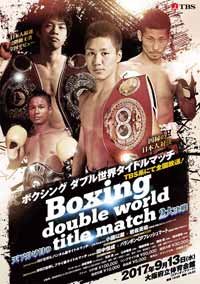 Review by AllTheBestFights.com: 2017-09-13, nice and tough fight between Yukinori Oguni and Ryosuke Iwasa: it gets three stars.

The Ibf super-Bw champion Yukinori Oguni entered this fight with a pro boxing record of 19-1-1 (7 knockouts) and he is ranked as the No.7 super bantamweight in the world (currently the #1 in this division is Guillermo Rigondeaux). He suffered his only loss when he faced Shingo Wake in 2013, since then he has collected nine wins and one draw beating Jonathan Guzman in his last one (=Guzman vs Oguni).
His opponent, Ryosuke Iwasa, has a record of 23-2-0 (15 knockouts) and he entered as the No.26 in the same weight class. He lost to Lee Haskins in 2015 (=Iwasa vs Haskins) but then he has won four bouts defeating Glenn Medura in 2017. Ryosuke Iwasa vs Yukinori Oguni is valid for the IBF World Super Bantamweight title (Oguni’s first defense); undercard of Kosei Tanaka vs Palangpol CP Freshmart. Watch the video and rate this fight!