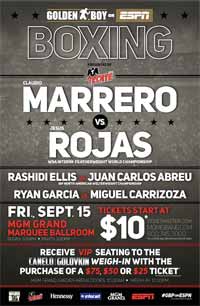 Review by AllTheBestFights.com: 2017-09-15, entertaining fight with a spectacular finish: Claudio Marrero vs Jesus Rojas is close to get four stars!

Claudio Marrero entered this fight with a boxing record of 22-1-0 (16 knockouts) and he is ranked as the No.23 featherweight in the world. He suffered his only loss when he faced Jesus Cuellar in 2013 (=Marrero vs Cuellar), since then he has won eight consecutive bouts defeating Carlos Zambrano in 2017 (=Zambrano vs Marrero).
His opponent, Jesus M Rojas, has an official record of 25-1-2 (18 knockouts) and he entered as the No.27 in the same weight class. He lost to Jose Angel Beranza in 2008 but since then he has collected twelve victories, two draws and one no-contest beating Abraham Lopez in his last one. Jesus M Rojas vs Claudio Marrero is valid for the interim WBA World featherweight title. Watch the video and rate this fight!